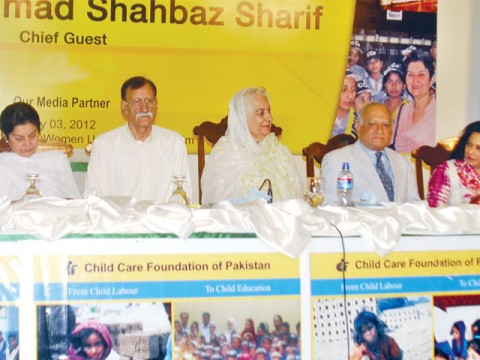 LAHORE – Lahore College for Women University in collaboration with Child Care Foundation held a seminar on child education titled “The role of educational institutions and civil society in the education of underprivileged children in Pakistan.” here on Thursday.

While addressing the participants, Zakia Shahnawaz said that child labour was a very critical issue of the country which was needed to be addressed. She said only educated youth could secure the future of the country.

Zakia Shahnawaz apologised on behalf of the Punjab Chief Minister for his inability to the function as the CM was scheduled to preside over the event. She congratulated LCWU and CCF for organising a seminar on the critical issue under the slogan “Educate Pakistan. Save Pakistan.” According to her, the key to this goal laid in the commitment of the people and for them to work selflessly for a cause with all their hearts and souls. She said that for sustained social development there was a need for investment and public mobility. She also assured Punjab government’s support to CFF projects and funding.

LCWU Vice Chancellor Dr. Sabiha Mansoor, in her welcome address, said that CCF inspired each one of us and warmly appreciated the young guests present on the occasion from CCF schools. She further said that we needed reaffirm our faith in human kindness and pledge ourselves to work for the society because the government could not implement anything without the help of concerned citizens.

He said 17 years ago, he started this journey when the carpet weaving industry came under attack because of allegations against child labour. But in countries like Pakistan it is not possible to simply ban it as Bangladesh did because these children are often working after school for a few hours to support their families, he said.

Justice (R) Nasira Javed Iqbal said that education was a matter of life and death for Pakistan. She asked the audience to spread the message of CFF. Dr. Pervez Ahmad Khan said that child labour and child education were very core issues in today’s world. He said that it was our aim to provide education to all irrespective of their age, sex or race but the main hurdle in this aim was undoubtedly poverty and other social constraints.

Raja Anwar spoke on the difficulties of the underprivileged half of our society. He also spoke on the struggles faced by his department in their goal to ensure quality education for all without any discrimination.

Earlier, six CFF students representing different districts of Punjab and Sindh performed a tableau. A pictorial documentary elaborating on the plight of children who were working at brick kilns, carpet weavers and other such business was also screened.