Zafar Iqbal, the AJK University spokesman, explained that most of the cases related to allegedly fake degrees belong to the period from 2001-2006 when the BA degree was imposed as an eligibility condition for contesting in election. He further said that these allegedly fake degree cases were brought to the notice of the university administration when the opponents of the some of the candidates contesting election reported to election commission and the university.

It is important to note that these are not cases of issuance of fake degrees by the university but cases where possibly unfair means during the examinations have been used for which investigation is underway. In most cases, the candidates appeared in the BA examination on production of fake certificates issued by various boards of examinations. The AJK University has already constituted a committee to scrutinise the record of those whose degrees/result cards have been challenged.

As regards not presenting the record in the Supreme Court, the spokesman clarified that an assistant controller of examination was recently deputed to present the record in the Lahore Election Tribunal of the Lahore High Court. He was asked to come back on 2nd July 2010. He stressed that the AJK University is fully cooperating with legal authorities.

In addition, the university’s committee is also undertaking investigations and has already in this context called four of the candidates to appear before the committee to record their evidence.

The committee’s findings are likely to come out shortly. In the end, the spokesman emphasised that the allegation that the AJK University is involved in issuing fake degrees is absolutely baseless and unfounded. The university is under no pressure whatsoever from any quarter and is functioning under rules.

The university enjoys confidence and trust of public as well as academic community, including Higher Education Commission. The spokesman reiterated that the alleged cases belong to 2001-06 period and the university has taken measures to prevent such cases in the future. (The news)

Peshawar, June 16: The Boards of Intermediate and Secondary Education of Peshawar, Mardan, Swat, Malakand and Dera Ismail Khan announced the results of the Secondary School Certificate (SSC) examinations on Tuesday.

A student of Islamia Collegiate School Peshawar clinched the top position in the Peshawar BISE while the remaining five of six positions in science and art groups went to girls. Abdul Malik of ICS secured 980 marks of 1050 to clinch the top position. He was followed by Spogmay Shujaat of Al-Karim Public School, Charsadda, with 974 marks. The third position was shared by three students of the science group – Muzhda Subhan, Zarlisht Rehman and Habiba Zahoor with 962 marks.

A total of 52,575 candidates appeared in the examination among them 42,057 were declared successful with a pass percentage of 80. A ceremony was organised on the premises of the board for announcement of the result. Provincial Minister for Elementary and Secondary Education Sardar Hussain Babak was the chief guest while BISE Chairman Farhad Jan was also present on the occasion.

MARDAN: The Mardan BISE announced the results of the Secondary School Certificate (SSC) annual examination for the year 2010 wherein of 43,202 candidates 35,270 were declared successful showing success ratio of 81.64 per cent.

MINGORA: Students of private institutions took the lead in the annual examination conducted by the Board of Intermediate and Secondary Education, Swat. A total of 20,811 candidates appeared in the examination and 17,947 were declared successful showing success ratio of 86 per cent.

DERA ISMAIL KHAN: The Board of Intermediate and Secondary Education, Dera Ismail Khan, also announced the results. In science group, a total of 6,684 candidates appeared in the examination and 5,391 were declared successful, showing success rate of 80.66 per cent.

In humanities group, a total of 13,305 candidates appeared in the examination and 9,802 were declared successful, showing the success ratio of 73.67 per cent. Anam Zaman of Saint Helon School stood first by securing 927 marks, followed by Hafiz Mohammad Ahmad Shah Zeb of Qurtaba School who obtained 916 and Sobia Faiz of the same school stood third by obtaining 914 marks.

Rawalpindi: Defying the Punjab chief minister’s orders regarding summer vacation, private schools and colleges in the city are still open forcing young children to bear the brunt of scorching heat of June.

Parents said that they have stopped sending their children to school because of the scorching heat. They complained that the school administrations were forcing them to send children to schools, as they have to complete the courses. The parents urged the education department to take action against the administrations of private schools and force them to close their schools for summer vacation.

Rab Nawaz, a father, said that all government schools have announced summer vacation but private schools are still open. “My children are studying in a private school, which is open, but I have stopped sending them to their schools because of the heat.”

EDO (Education) Malik Ashraf was not available to give his version on the issue. The news

600,000 to get free vocational training
Islamabad: The Benazir Income Support Programme (BISP) and National Vocational and Technical Education Commission (Navtec) signed a memorandum of understanding (MoU) here on Monday for the provision of vocational training to BISP beneficiaries.

The MoU was signed by the Chairperson BISP Farzana Raja and Chairman Navtec Adnan A Khawaja at the BISP Secretariat. BISP has initiated a Technical and Vocational Programme to impart vocational training to its beneficiaries so that they acquire a skill and are able to earn a respectful livelihood and break the shackles of poverty. One person of each beneficiary family will be nominated by the family head and that person will be given vocational training.

Talking to the media at the MoU signing ceremony, Farzana Raja said work is underway to give free vocational training to 600,000 families of those districts where the poverty survey has been completed. She said that BISP will bear the expenses of those girls who are interested in nursing and other fields.

“The vocational training initiative of BISP has won international appreciation and recognition. Under this project backward areas of the country will be given preference in provision of technical training,” she added.

Navtec would also ensure that this programme does not overlap with other training programmes being run by it. Navtec will also ensure that the successful participants of the vocational and technical training are given certificates/diplomas bearing the logos of BISP and Navtec.

It must be mentioned here that Navtec will provide training to BISP beneficiaries all over Pakistan including Azad Jammu & Kashmir, Fata and Gilgit-Baltistan.

It is pertinent to mention here that Navtec has successfully trained 10,000 youth in various trades and crafts in collaboration with public and private organisations. The news

Lahore: The University of Health Sciences (UHS) has announced the result of the Final Professional BDS supplementary examination. According to a press release here on Monday, a total of 85 candidates from five affiliated dental colleges appeared in the exam and 63 passed while 22 failed. Pass percentage remained 74.118. The news

Entry test as per previous policy
Peshawar, June 08: The Higher Education Department, Khyber Pakhtunkhwa Monday notified that as per previous policy entry test conducted by Education Testing and Evaluation Agency (ETEA) for admission to professional colleges was restricted to Engineering University and Medical and Dental Colleges functioning in public sector. The professional colleges (engineering, medical, dental) functioning in private sector were conducting their own test for this purpose, the notification added. It said that in order to ensure merit, the Government of Khyber Pakhtunkhwa has decided that it was mandatory for all candidates seeking admission in professional colleges in public and private sector to pass entry tests conducted by ETEA. The news

Students protest against Hajvery University, block The Mall
Lahore, June 08: A large number of students of the Hajvery University on Monday blocked The Mall for over two hours in front of the Governor’s House and protested against the varsity administration.

Students held posters and banners that contained slogans against the varsity administration and demanded that their futures be secured. The protesting students refused to cooperate with police officials and blocked The Mall from 11am until 1pm and demanded that Punjab Governor Salmaan Taseer take notice of the issue.

One of the students, seeking anonymity, said the varsity administration had given them admissions in engineering four years ago, but after the four years were completed, the students were being awarded degrees of BS honours.

“We paid large amounts in dues to study engineering, but the administration is not giving us engineering degrees,” he said, adding that the students had learned that the Pakistan Engineering Council did not accept their degrees, as they did not fulfill the requirements of the PEC.

Another protester said that students would not sit in their classes until the government acted against the varsity administration, adding that without the engineering degree, students would be hard pressed to find jobs.

“The labs and faculty at the varsity are not up to requirements, which is why the PEC was not approving their degrees, which is not fair to the students,” he said. The administration of the Hajvery University was not available for comment despite repeated attempts to contact them. Separately, insiders said that the administration was avoiding contact with the media due to the protests, adding that Hajvery University Chairman Sheikh Atif Mahtaq had opted to travel abroad as soon as the students started their protest against the varsity. Daily times 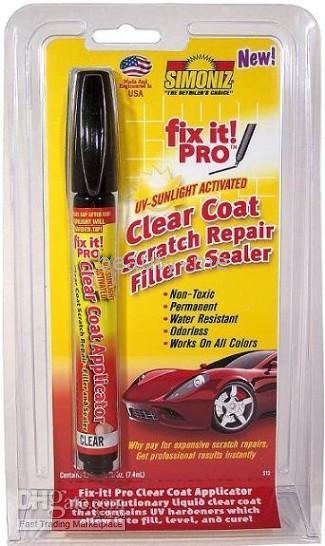 Odorless
Permanent
Non-toxic
Water resistant
Works on all colors
Simoniz Fix It Pro Pen – Clear coat scratch repair filler and sealer. Why pay for expensive scratch repairs. Get professional results instantly. Fix It Pen is the fastest scratch repair that safely removes scratches from your car`s finish quickly and easily. Fix It works on any car, in any color with just 3 easy steps. Apply Fix It, buff it into the scratch or scuff, and then just wipe away.