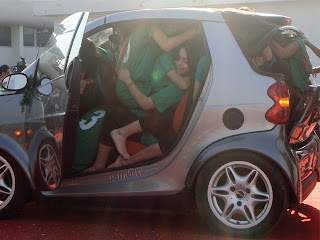 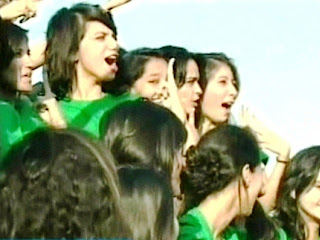 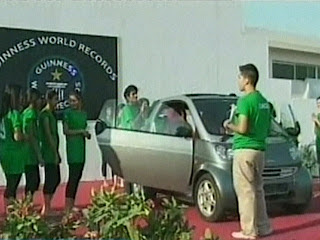 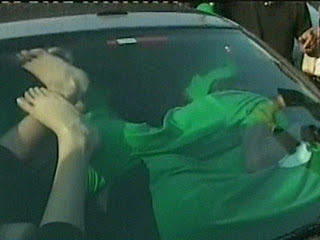 Aymen Saleem, a second-year A’ Level student at Karachi Grammar School, was browsing newspaper headlines in her living room, when she came across a story about the world’s largest cake. The story sparked her curiosity and soon enough she was searching for her very own record to break. After a quick search on Google, she found the perfect challenge. All she needed was 19 willing girls and a Smart Car, a two-door micro-car manufactured by Daimler AG in  France and Germany. Luckily for Aymen, she happened to have one of them parked in her very own driveway. It was a birthday present from her father Yousuf Saleem.

On Wednesday, Aymen and 18 other girls, from different A’ Level institutions across the city, including KGS and Southshore School, managed to break a previous record by fitting into the vehicle with its doors closed for five seconds. The current official record holders are the Climb FitTeam of Australia who compressed 18 students into a standard SmartCar at the Warringah Mall, Sydney Australia on January 25, 2010.

The girls managed to meet the challenge at the BBQ lawn of Creek Club in front of a jury at a historic event organised by Karim Mohammadi and Rehan Elahi. The chief guests included the federal adviser on textiles Dr Mirza Ikhtiar Baig, adviser Sharmila Farooqi, Sindh Assembly Speaker Nisar Khuhro and former cricketers Wasim Akram and Saleem Yousuf. The girls had been through the drill numerous times. They positioned themselves and with precision crammed one by one into the two-door car in layers. Within a minute they were all inside the car and not only did they manage to break the world record, they managed to stay in the car for a gruelling 10 seconds, double the current record time.

“I want parents around the country to encourage their children to achieve greater things and believe that when you try, you achieve,” said Aymen. Other participants Tanya Pabani, Fatima Ismail and Zahshanné Malik were thrilled about their feat but more interested in meeting Wasim Akram.

Baig said he had initially been sceptical but was won over after he saw them fit in the car in three layers with one literally on the floor mat. Aymen’s parents Yousuf and Shireen told The Express Tribune that even though at first they felt it was just another outdoor activity, they provided them with a coach Hassan Aslam once they realised how determined they were.

Pakistanis in the record books

The highest electronically measured speed for a ball bowled by any bowler is 100.23mph (161.3km/h) by Shoaib Akhtar (Pakistan) against England on 22 February 2003 in a World Cup match at Newlands, Cape Town, South Africa.

A football made from artificial leather PV-PVC and hand-sewn by staff at Ihsan Sports of Hajipura, Sialkot, Pakistan, had a diameter of 4m (13ft 1in) when measured on 30 June 2002.

The heaviest weight lifted using only the ear is 51.7 kg (113 lb 15 oz) by Zafar Gill (Pakistan), who lifted gym weights hanging from a clamp attached to his right ear and held the weight for seven seconds on May 26, 2004 at Lahore, Pakistan.

Abdul Sattar Edhi (Pakistan) began his ambulance service in 1948, ferrying injured people to hospital. Today, his radio-linked network includes 500 ambulances all over Pakistan, and attracts funds of US$5 million a year.

The youngest Test player ever is Hasan Raza (Pakistan) who made his debut, aged 14 years 227 days, against Zimbabwe at Faisalabad, Pakistan on 24 October 1996.

The largest flaming candle image took place at the Serena Hotel in Faisalabad, Pakistan when 48 people lit 8,154 candles to create the Sandoz logo on December 31, 2003.