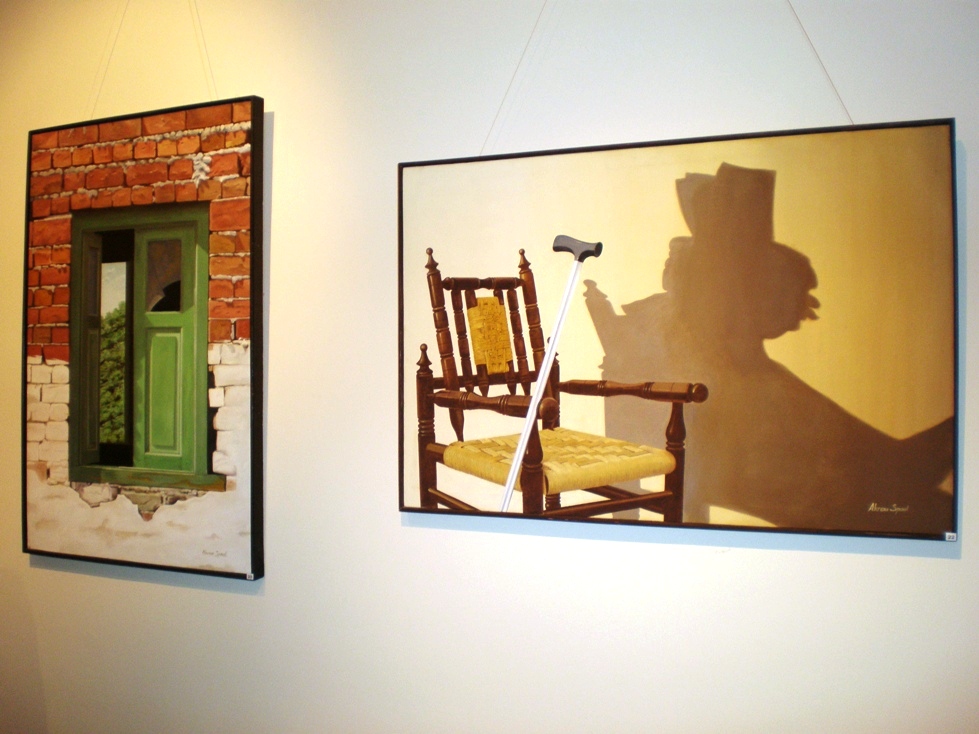 ISLAMABAD: Cohesion – a two-person exhibition of unique paintings by Akram Spaul and Sana Arjumand, will be displayed at Gallery 6 on April 28.

Ambassador of Argentina Rodolfo J Martin will inaugurate the show, which will remain open for public until May 13.

Arjumand creates paintings with mixed media canvasses to explore the set-up of society, social responsibility, confusion of identity and the role of religions and culture.

Frequently employing symbolism, her work expresses identity, the value of cultural heritage and the way to see modern world around her.

Akram Spaul’s work seems academic with super realism of abstraction and action painting. He paints still life with oil colours featuring a piece of furniture, a garden, washing area; infusing detail that brings the painting to life and routine activities into focus with stunning beauty.

Spaul paints with delicate life like detail that explores his subject matter. His recent realistic oil paintings have distinctly various techniques with a different subject matter.

Themes of life and routine are explored with truthful and accurate depiction that contemporary life offers to the artist.

Everyday activities are worthy subjects for him as he mostly paints and draws the lives and surroundings of the middle and lower classes, the ordinary and unadorned.

His work draws attention to the beauty that is often ignored in life around, especially the physical settings and material conditions that surround us. app 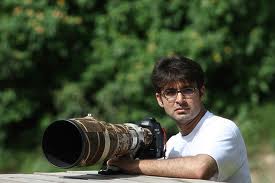 ISLAMABAD: A nature photography and poster competition will be held and a tree plantation drive will be launched today (Tuesday) in connection with the International Earth Day. The competition will be held at the Pakistan Museum of Natural History (PMNH), in collaboration with the Pakistan Science Foundation (PSF), in which school and college students will participate to show their love for nature and earth. PSF Spokeswoman Rehana Batool said the Earth Day is considered to be the best time of the year to introduce children to environmentally friendly habits to preserve and protect the Earth. The Earth Day is celebrated across the world each year on April 22 to remind people that the choices they make today can have an impact on the planet for decades to come. Each year the day marks the anniversary of the birth of a modern environmental movement during 1970s, which aimed at keeping check on the detrimental impacts of industrialisation and modernisation on the human beings and environment. app

ISLAMABAD: The World Malaria Day is being observed tomorrow (Wednesday) to recognise global efforts to control malaria as 3.3 billion people in 106 countries are at risk of malaria.

This year the theme for World Malaria Day is “Sustain Gains, Save Lives: Invest in Malaria”.

The day was announced to provide “education and understanding of malaria” and information of year-long intensified implementation of national malaria-control strategies, including community-based activities for malaria prevention and treatment in endemic areas.”

Prior to the establishment of World Malaria Day, Africa Malaria Day was held on April 25.

The Africa Malaria Day began in 2001 one year after the historic Abuja Declaration was signed by 44 African malaria-endemic countries at the African Summit on Malaria.

Investments in malaria control have created unprecedented momentum and remarkable returns in the past years. In Africa, malaria deaths have been cut by one-third within the last decade; outside of Africa, 35 out of the 53 countries affected by malaria have reduced cases by 50 percent in the same period.

In countries where access to malaria control interventions has improved most significantly, overall child mortality rates have fallen by approximately 20 percent.

However, these gains are fragile and will be reversed unless malaria continues to be a priority for global, regional and national decision-makers and donors.

The huge increase in support for malaria control interventions in recent
years means there is a reduction in the death rate; where once over a million people died of the disease annually, the figure is now closer to 790,000.

On World Malaria Day, everyone in the malaria community, from district health officers to net manufacturers, epidemiologists to volunteer health workers are committed to continuing the fight to reduce the burden of malaria.

In 2010, about 3.3 billion people, almost half of the world’s population, were at risk of malaria. app

After misappropriations exposed in admissions of 58 students in Aitchison College last year, the parents, who are seeking admissions for their children this year, are expressing their concerns. The parents said many deserving children who qualified the admission test were denied admission last year which not only defamed the traditions and prestige of the college but also deprived the students of their right. They said, “The parents spend a lot of time and money in preparing children for the admission test but due to favouritism their efforts may go waste.” They also expressed their hope that the management of the college would not repeat this kind of practice this year and should not come under pressure from anybody and follow the rule of admitting children on merit. A father of a child, who took the admission test this year, also urged the college administration to allocate quota for the children belonging to remote areas especially interior Sindh, Balochistan and FATA etc as they could not compete on open merit. He said the students belonging to remote areas did not have opportunities like the students from urban areas.

It may be mentioned here that reportedly last year Aitchison College admitted 58 students in the college despite the fact that they failed in admission test. According to media reports, last year many students were admitted with the support of political figures mostly from the ruling parties. It is also reported that last year, the college administration not only obliged the candidates who failed in admission test, but also admitted some students despite unavailability of seats in various classes.

Some parents while talking to TheNation said that last year some touts on behalf of some prominent political persons solicited huge amount of money from parents for admissions. “They were asking parents to give them Rs 2 million for admission and those who cleared the written test give Rs 1.5 million for clearance of interview and medical examination to verify age and health condition,” they said.

MIRAMSHAH: Teachers and students of the two government colleges for boys in North Waziristan have complained about the lack of drinking water and warned to boycott the forthcoming intermediate examinations if water was not provided to them.

Principal of the Government Postgraduate College, Miramshah, Prof Taj Malook, said there was no water in the college and hostels for the past two weeks as the college tubewell wasn’t functional.

The teachers and students complained they had to bring drinking water from home to the college but the situation became difficult when they need to use toilets.They complained that around 900 students enrolled in the college had been facing water shortage although they repeatedly brought the issue into the notice of the college officials and political administration.

Principal of the Government Degree College, Mir Ali said the college has been without water for the past four months and they had to bring water from nearby streams to fulfil needs of the students and teachers.

He said they had brought the issue several times in the knowledge of the political administration.Our correspondent from Khar adds: Fifty-eight young men from various tribes will be recruited in the Frontier Corps (FC) in the first batch of the recruitment, an official said on Monday.

The Bajaur Scouts official, Lt Col Ayub Awan told reporters in Khar that recruitments in the FC has been launched on the directives of the Inspector General Frontier Corps to fill the vacancies after the retirement of some FC soldiers.

The official said 58 youth from Mahsud, Khattak, Afridi, Mohmand, Tarklani and Utmankhel tribes would be recruited during the first phase.A selection committee comprising senior officials and a doctor has been formed for the process, he added.

LAHORE – The Gurmani Centre for Languages and Literature of the Department of Humanities and Social Sciences at Lahore University of Management Sciences organised a conference on the “Naya Urdu Afsana” on April 7 to commemorate the centennial of the iconic writer Saadat Hasan Manto. Twenty two speakers participated. It was a very well organized and well attended event. The daylong conference began with the welcome address by Vice Chancellor Professor Adil Najam and introduction by Yasmeen Hameed, coordinator of the Gurmani Centre. This opening session was chaired by Intezar Husain, who brought into focus the different problems associated with afsana, as a term and as a concept. Dr Shamim Hanfi from Delhi delivered an eloquent keynote address in which he spoke about the different receptions and interpretations of Manto’s writings and also commented on afsana in general by saying that its purpose was not to report on the social and political circumstances of the time but rather to shed light on human emotions.
Bano Qudsia spoke about new trends in the Urdu short story—she said that creativity, however radical, is grounded in a pre-existing tradition. The second session “Urdu Afsane Ke Na’e Rujhanat” or “New Trends in the Urdu Short Story” was intellectually charged, with writers and critics discussing the new trends in the Urdu short story in the light of the modern and post-modern literary theories, symbolism and mystic thought. The participants were Asad Muhammad Khan, Masood Ashar, Atiya Syed, Asif Farrukhi and Najeeba Arif. Moderated by Hameed Shahid, this discussion covered sufi elements in Urdu literature, discourses on modernity, contemporary critical debates, contemporary afsana and history of Urdu afsana. The third session was in English on “Manto and the 1947 Divide”.
Speakers were Ayesha Jalal, Syed Noman-ul-Haq and Farrukh Khan, and Bilal Tanweer moderated the session. Manto, according to Professor Jalal, exposed social ills and left a rich archive that can be attributed to his expertise. The last session was a critique of the writings of individual short story writers in which the fiction of writers like Khalida Husain, Naiyar Masud, Asad Muhammad Khan, Shams-ur-Rahman Faruqi, Hasan Manzar and Mansha Yad was critically evaluated. Speakers were Rasheed Amjad, Mirza Athar Baig, Anwaar Ahmed, Hameed Shahid and Mubeen Mirza. Zia-ul-Hasan moderated the session. The conference ended with the viewing of a play “ Manto, Adab ki Adalat Mein”. It was also announced that essays read in the conference would soon be published in book form.

PESHAWAR: The Teaching Staff Association, Islamia Collegiate School, Peshawar, has asked the government to accept their demands or else they would launch protest campaign.

Speaking at a news conference on Monday, the association’s president Shaukat Ali and other office-bearers asked the governor to promote teachers from grade 16 to 20 on seniority basis and regularise the services of all those working against ad hoc and fixed salaries. He also asked the government to provide funds to solve their problems.

He said the provincial government had allocated funds and the court had also issued instructions but still 60 teachers had been deprived of their rights for the last 35 years.Shaukat Ali said out of the total 132 teachers none was given representation in the syndicate. He alleged the Islamia College University had illegally grabbed their funds and caused financial problems for the school.

He alleged that senior staff were utilising the vehicles, generators and other staff for their personal use and deprived the junior staff of their rights.He said the teachers would stage hunger strike camp outside the University of Engineering and Technology Peshawar if their demands were not met within three days.

World Book Day: Government College University (GCU) Library Society held activities regarding World Book Day with an aim to promote the habit of book reading on Monday. The activities began in the morning from the Vice Chancellor’s office where students pasted a badge of World Book Day on the shirt of Prof Dr Muhammad Khaleeq-ur-Rahman. —Correspondent

Inter exam from May 8

INTERMEDIATE Annual Examination 2012 under the Board of Intermediate and Secondary Education (BISE) will commence from May 8. A BISE spokesperson said training workshops for the examination staff had also been started in connection with the exams.