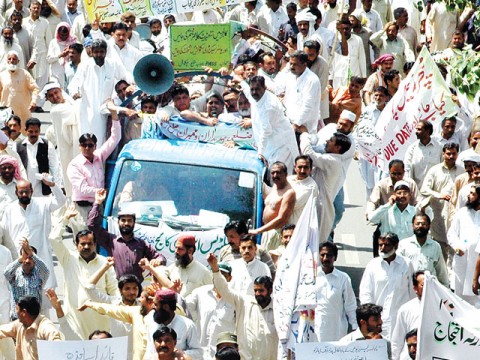 LAHORE – Punjab Teachers’ Union and Teachers Joint Action Committee took out a protest rally for their demands from Nasir Bagh to Regal Chowk, The Mall here on Thursday.

The teachers, hailing from across the province were having placards and banners inscribed with slogans highlighting their demands. They also chanted slogans and staged sit-in in front of various places. On the occasion, teacher leaders including Rai Abdullah, Sheikh Hasanaat, Ch Basharat Gujar, Haji Islam, Arshad Gul, Ashfaq Younas, and others said in the situation of high prices of essential commodities and utility bills teachers were forced on hunger.

They said bureaucracy was exploiting the teachers and they were unable to take their rights. They demanded the government revise their pay scale and raise their house rent and medical allowance. They also announced to boycott non-teaching activities. The teacher leaders also said that they would stage sit-in in front of Parliament House, Islamabad on May 16 if their demands were not fulfilled.